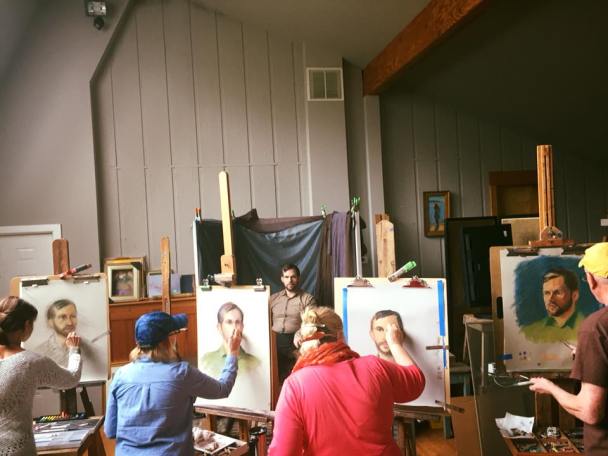 Lately I have been making a little extra money modeling for a drawing class. Four women and one man—all in or past their fifties—make up the class, which is taught by a local portrait artist (who is also my landlord’s sister, hence the job). The sessions take place in a small rural cabin built for precisely this use: the room lacks utilities and is barely heated, but huge glass panes installed on the roof let in beautiful light from the north. I was surprised how difficult it is to sit completely still for twenty-minute intervals, especially early in the morning and while recovering from a cold. Even more surprising was how much I was able to learn about art by allowing strangers to draw me.

I’ve never been able to draw. My mom would disagree with me about this, reminding me that as a kid I enthusiastically produced dozens of the cute, colorful sketch drawings of bugs and cartoon characters and imaginary creatures that kids love to make. And in my early twenties, inspired by the artistic personalities I often found myself surrounded by, I would occasionally scratch little doodles into a journal or in the margins of letters I would mail to friends. But the idea of transforming the contours of reality into images on a page always seemed downright impossible, and the fact that anyone could do it at all struck me as a mystery and a miracle roughly on par with the resurrection of Christ or the invention of language.

So during these sessions, I made an effort to listen. I was fascinated by what I heard. Drawing from life is thrilling because it has nothing to do with imagination: your task is to dutifully record the world of appearances onto a sheet of paper, using only your eyes, hands, and a set of rather rudimentary tools (charcoal, pastels, brushes, chamois, an easel, etc.). You become a kind of conduit, the catalyst by which a moment (or a small, limited collection of moments) is made permanent. Your duty is to closely observe reality—my face, the light falling on it, the point where my face becomes my cheek, the line of my mouth, and so on—to recreate it in static form. And to do this, you must see.

Forgive me this seemingly obvious observation—it’s not as obvious as it might seem. Our sight is regularly clouded by our thought: we try, one could say naturally, to see beyond the merely seen—to capture the essence of what is seen by seeing through the world of appearances. What we think of as sight is, more often than not, a mixture of sight and thought with no clear indication where one ends and the other begins. When we look at a person, we try to gain a sense of their interior dimension—whether that be the content of their emotions at this particular moment, or something deeper and more shrouded such as their soul, personality, or character—by looking for clues on the surface. (This is especially the case when the person in question is a friend or loved one.) A facial expression, a hairstyle choice, the brightness of one’s eyes: all of these things have a double existence, both as a mere appearance and as a clue as to what lies beyond the appearances.

We quite naturally hold the mysterious thing beyond to possess more reality than mere appearances, and we do not typically deal well with subtlety. Ask nearly anyone to draw a picture of a happy woman, for instance, and every image will likely share two qualities: exaggerated feminine features and an exaggerated smile, to ensure that viewers recognize beyond any possible misunderstanding that this is an image of a woman who is happy. It is unlikely, however, that someone so prompted might immediately produce an image of the Mona Lisa, whose wry smile conceals more than it reveals. In creating images, we regularly seek to plainly represent the thing beyond—femininity, happiness—rather than to construct a surface of appearances that subtly hint beyond themselves at what might, with no certainty, exist beneath what is seen.

Drawing from life demands that we remain beholden to reality as it is. If there is a depth beyond this surface—if behind my face there lies a soul, a character—its existence must be somehow revealed in the surface itself. The depth can never be directly represented: it may only be hinted at by subtle clues present in the surface.

In “The Origin of the Work of Art,” Heidegger declares that “All art is essentially poetry” (“Alle Kunst ist in ihrem Wesen Dichtung”). I no longer believe this to be true. Much of our spoken and written discourse reveals the self directly: we regularly and unproblematically communicate our feelings, intentions, beliefs, memories, and so forth. We can, and often do, speak at length about things that cannot be represented in images: love, God, time, space, etc. The relationship between language and thinking is not identical to the relationship between image and thinking. The relationship between surface and depth in poetry is different from that in drawing. Exactly what that difference is, however, will require more thinking. But against Heidegger, I propose the following: all art is either poetry or drawing. And we have yet to fully understand the relationship between the two.

One thought on “Reflections on Being Drawn”