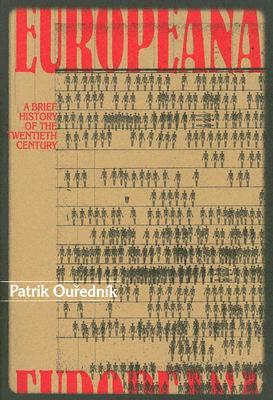 I qualify “about” because the best novel of the Twentieth Century is obviously Ulysses. (I haven’t read Ulysses, but enough people whose opinions I trust have told me that it is the best, so I take this to be true.) But Ulysses was written in the innocent adolescence of a new age—the one cracked open by machine manufacturing, the invention of the automobile and airplane, and the second founding of America with the settlement of the Civil War—when such a magisterial, imaginative, synthetic work full of style and possibility was still conceivable. After the two-phase internal collapse of Western civilization with the War to End All Wars followed by World War II, such an endeavor became self-evidently ridiculous: as the details of the otherworldly barbarity with which the German Sonderkommandos and the Red Army collaborated to turn Poland into a hellscape of human sacrifice slowly became available to the world’s reading public, it became immediately and undeniably incumbent upon any thinking person to stare the facts in the face and figure out what the hell happened. (Adorno’s famous remark about the impossibility of poetry after Auschwitz is silly if understood to be true for all time, but it was surely a sensible way to think in 1955.)

Ouředník’s book does precisely this. It is assembled entirely out of dry, factual statements about a wide variety of events and developments taking place between 1914 and 1999—the formation and beliefs of the Jehovah’s witnesses, the creation of barbie dolls and the dawn of the consumer society, the dawn of New Age spirituality and the sexual revolution, painstakingly accurate descriptions of most of the century’s philosophical and theoretical schools, and above all the twin horrors of German National Socialism and Soviet Communism in Russia—held in parataxis as skillful as Solomon’s. But unlike Solomon, Ouředník never declares all to be vanity, nor does he need to: he suspends judgment and lets the century speak for itself in all its insanity, terror, and, on occasion, genuine hilarity. And in contrast to the 800-some pages of Joyce’s tome, “Europeana” is a slim volume of scarcely 100 pages, containing what lesser historians would require a thousand to adequately cover.

At no point does Ouředník break from this “objective” voice to say that such a development is bad. Instead, he simply reports the consequences of the nuclear blast: alongside the gruesome image of “the school children who survived the explosion picked maggots out of patients’ wounds with chopsticks,” he tells us that “[p]eople who survived the explosion and the atomic diseases scared other members of the population because they looked like lepers and behaved like madmen,” which in its naïve truthfulness contains a jet black humor. And then he lets us know about the thinking of the age, characterizing the disputes of anti-atomic idealists and pro-bomb realists:

Afterwards a lot of people thought it had been gratuitous brutality to drop an atom bomb at the very end of the war, but military strategists said that if the Americans had not dropped it, someone else would have, because it had to be tried out at least once in real conditions in order to create a balance of terror as a guarantee against the outbreak of a third world war.

For anyone with eyes to see, the judgment passes itself.

Of course, it is inaccurate to call Ouředník’s book a “novel.” There is nothing fictitious about it, and in a more serious age we would consider this a new genre of experimental historiography much more fertile and interesting than most of the options currently on the table. Only on precisely two occasions does Ouředník allow himself miniscule poetic flourishes, made all the more poignant by their rarity: “And young people looked toward the future and the wind ruffled the ears of corn and the sun rose on the horizon.” The author’s commitment to objectivity demonstrates how any optimism about “the arc of history” dissolves in the acid bath of brutal, overwhelming facticity that is the Twentieth Century. The constant deluge of insane details occasionally grants the reading a dreamlike quality, much akin to reading a science fiction novel, just before the reality of what he is reporting comes crashing down. “And the Jehovah’s Witnesses said that smoking and alcohol soil the blood,” he tells us, “and they refused to eat black pudding and blood sausage and refused blood transfusions because the mixing of blood contradicted divine ordinances, just like the consumption of blood sausage or alcohol or extramarital sex.” Silly enough, and yet another contribution to the laundry list of kooky new religions that emerged in the primordial soup of the late 19th century. But in the next sentence, the hammer falls: “And they refused to enlist in the army and said that they belonged to the Kingdom of God and worldly matters were no concern of theirs, and many of them died in the concentration camps in Germany and the Soviet Union because their attitude subverted the revolutionary ideal and propagated asocial and counterrevolutionary ideas in society.”

The Twentieth Century was an age of contradictions: it matched childish, naïve optimism about the possibility of human freedom—from God, from morality, from the Earth, from responsibility to one another, from all internal and external limitations placed on the human animal—with a rapid and gleeful development of techniques and technologies of barbarity that makes Caligula’s Rome look utopian by comparison. “Europeana” is a gift because it clarifies for us the fact that practically nothing from the period can be clarified, and reminds us that many of the learn’d experts who try to do so would have been (if they weren’t already, in reality) willing architects of the century’s most grotesque and dehumanizing innovations.